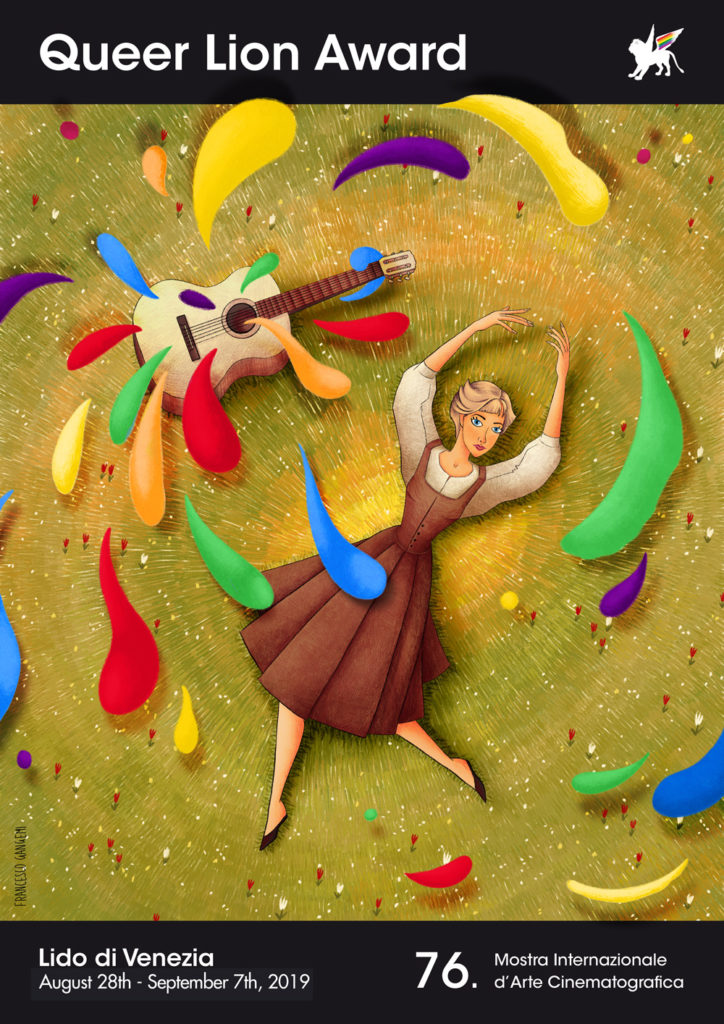 Rialto by Peter Mackie Burns (UK, Ireland, 90′, 2019)
Colm is in his mid-forties, married, with two teenage children. Still grieving the death of his father, a destructive figure in his life, Colm struggles with his relationship to his own son, whilst at work a recent takeover threatens his job. Unable to share his vulnerability with his wife, Colm’s world is falling apart around him. In the midst of this crisis, Colm solicits sex from a young man called Jay. This encounter and his growing infatuation has a deep effect on Colm. He finds a comfort in Jay that no one else can provide.
Presented in Orizzonti

El Principe by Sebastián Muñoz (Chile, Argentina, Belgium, 96′, 2019)
Chile, 1970. During a night of heavy drinking, Jaime, a lonely 20-year-old young man, stabs his best friend in what seems a passion outburst. Sentenced to prison, he meets “The Stallion”, an older and respected man in whom he finds protection, and from whom he learns about love and loyalty. Behind bars, Jaime becomes “The Prince”. But as their relationship grows stronger, “The Stallion” faces the violent power struggles within the prison.
Presented in Settimana Internazionale della Critica

House of Cardin by P. David Ebersole, Todd Hughes (USA, France, 95′, 2019)
House of Cardin is a rare peek into the mind of a genius, an authorized feature documentary chronicling the life and design of Pierre Cardin. A true original, Mr. Cardin has granted exclusive access to his archives and has provided unprecedented interviews at the sunset of a glorious career. A vivid, colourful portrait of the refined yet contradictory society Cardin was/is part of, from Veneto (where Pietro Cardin was born 96 years ago) to Paris to Asia; from Jean Cocteau, Jean Marais, Jeanne Moreau, Christian Dior, Visconti, Pasolini to Jean Paul Gaultier, Philippe Starck, Sharon Stone, Naomi Campbell, Dionne Warwick.
Presented in Giornate degli Autori

Barn (Beware of Children) by Dag Johan Haugerud (Norway, Sweden, 157′, 2019)
When crisis strikes we reveal our true colors. Beware of Children traces the dramatic aftermath of a tragic event in a middle class suburb of Oslo. During a break in school 13 year-old Lykke, the daughter of a prominent Labour Party member, seriously injures her classmate Jamie, the son of a high profile right-wing politician. When Jamie later dies in hospital, contradicting versions of what actually happened risks making a difficult and traumatic situation worse. Was it only innocent play behind? Liv, the school’s principal and the secret lover of Jamie’s father, must find the strength to confront a community in distress, and her own highly conflicted emotions.
The tragic event at the center of the story will put to test the balance of all the couples – gay and straight – in the movie.
Presented in Giornate degli Autori

Bombay Rose by Gitanjali Rao (UK, India, France, Qatar, 93′, 2019)
Amidst the struggle of survival in a big city, a red rose brings together three tales of impossible loves. Love between an unavailable girl and boy. Love between two women. Love of an entire city for its Bollywood stars.
Presented in Settimana Internazionale della Critica

Moffie by Oliver Hermanus (South Africa, UK, 99′, 2019)
Based on André Carl van der Merwe’s book, Moffie (a derogatory Afrikaans term for a gay man) follows the story of Nicholas van der Swart: from a very young age, he realises he is different. Try as he may, he cannot live up to the macho image expected of him by his family, by his heritage. At the age of 19 he is conscripted into the South African army and finds his every sensibility offended by a system close to its demise, and yet still in full force. Set during the South African border war against communism, this is a long overdue story about the emotional and physical suffering endured by countless young men.
Presented in Orizzonti

Psykosia by Marie Grahtø (Denmark, Finland, 87′, 2019)
Viktoria is an odd and extremely self-disciplined researcher in the field of suicide. She is invited to a psychiatric ward to treat the suicidal patient Jenny. Through intimate night conversations, they form a tight bond. Viktoria slowly opens up to experience closeness with another person for the first time in her life, but the closer the two women get, the more it becomes clear that something is not as it seems.
Presented in Settimana Internazionale della Critica

Lingua Franca by Isabel Sandoval (USA, Philippines, 90′, 2019)
In this beguiling drama, an undocumented Filipina immigrant paranoid about deportation works as a caregiver to a Russian-Jewish grandmother in Brighton Beach, Brooklyn. When the American man she’s secretly paying for a green card marriage backs out, she becomes involved with a slaughterhouse worker who is unaware that she’s transgender. When Alex’s machismo is threatened upon discovering her transgender status, he finds himself weaponizing her immigration anxieties to emotionally brutalize Olivia.
Presented in sezione Giornate degli Autori

Ema by Pablo Larraín (Chile, 102′, 2019)
After a terrible accident fractures her family and her marriage, a woman sets out on a risky quest to reset her life, in this incendiary drama about art, desire, and family in which many characters express their feelings through dance. From Chilean director Pablo Larraín, competing for the Golden Lion for the third time after Post Mortem (2010) and Jackie (2016).
Presented in Venezia 76